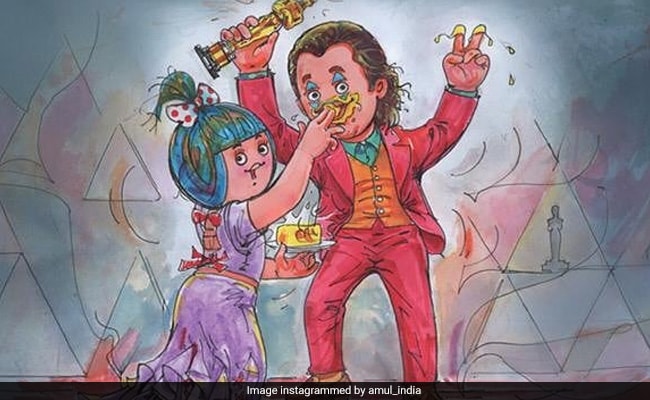 Joaquin Phoenix, who won the Best Actor award at the 92nd Academy Awards for his performance in the 2019 film Joker, got an ”utterly, butterly” tribute from Amul. The dairy brand, which is known for its quirky social commentaries on contemporary issues, shared a new post honouring Joaquin. In a recent post shared on the brand’s official Instagram page, the Amul girl can be seen feeding Joaquin some butter as he holds his coveted trophy, dressed in (no points for guessing) Joker’s outfit. Wait, it gets better! The caption on the post read, “Have on a Renee day.” For the uninitiated, the caption was a reference to actress Renee Zellweger, who went home with the Best Actress trophy for Judy at this year’s Academy Awards.

Joaquin Phoenix was not only hailed for his performance in the film, he also received a lot of praise for his acceptance speech during this year’s Oscars. “I am full of so much gratitude right now. I do not feel elevated above any of my fellow nominees or anyone in this room because we share the same love, the love for film. This form of expression has given me the most extraordinary life. I don’t know what I’d be without it. But I think the greatest gift that it’s given me, and many of us in this room, is the opportunity to use our voice for the voiceless,” Joaquin said during his acceptance speech.